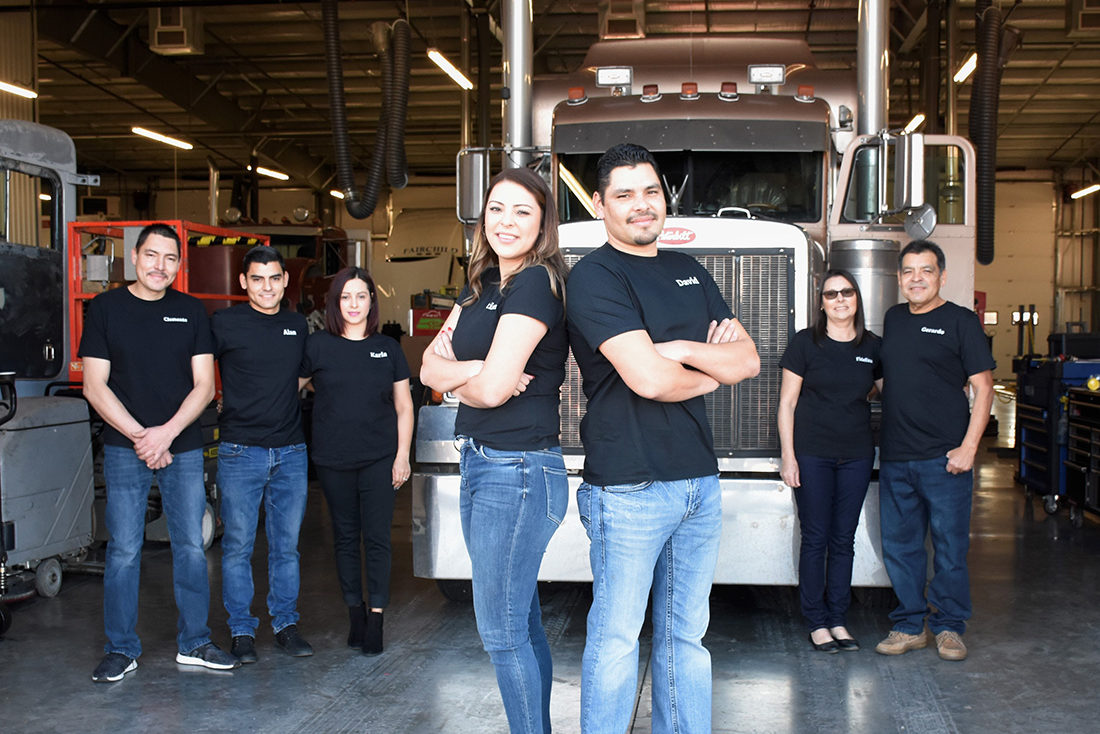 Grandview—David Ruelas was working in agricultural fields near his home in Sunnyside, following in the footsteps of his parents and older brother, when a door opened and he became an apprentice to a diesel mechanic in Yakima. Within a year, at age 21, he was a lead mechanic at the shop.

The 45-minute drive along I-82 from Sunnyside to Yakima was tiresome, but it gave him time to think, and what he thought was that there was a need for a diesel mechanic in the lower Yakima Valley, especially one who would travel to the truck instead of making the owner deliver the truck to him.

“My idea was to make their life easier,” he said, “and my idea worked.”

With a $1,000 loan from his mother and the use of his father’s credit cards, he bought a truck and started Fast Mobile Service in 2005.

Now named Fast Mobile Service Truck Repair and Parts, his company has grown from one guy and a service truck to three service trucks, 16 employees, and a 14,000-SF repair shop and parts store on nine acres at the Port of Grandview that they have just about outgrown. He also owns Fast Driveline Services, a driveline repair shop in Yakima.

“I was the kind of kid who would just work and work,” he said. For the first seven years, he was working 24/7; whenever a customer called he would go.

In 2011 he began leasing a 5,400 sf shop in Sunnyside so that he could do maintenance and repair work there, as well as doing roadside repairs and making service calls.

He had five employees in 2012, when his sister, Fatima, came to him and insisted that he hire her full-time to manage the office. When he said he couldn’t afford to hire her, she replied, “Yes, you can. You’ll see.”

Fatima immediately began implementing business systems to make the office run more smoothly and she’s also the one who reached out to the Washington Small Business Development Center when she needed assistance growing the business.

The Washington SBDC is a network of more than 30 advisors working in communities across the state to help small business owners start, grow, or buy/sell a business. SBDC business advisors provide no-cost, confidential, one-on-one advising to help clients overcome challenges and achieve their goals, whatever those goals may be. The Washington SBDC is hosted by Washington State University which provides administrative oversight of the program in partnership with the U.S. Small Business Administration (SBA). The SBDC office in Yakima is co-located with the Yakima County Development Association.

By 2016 Fast Mobile Service had outgrown the shop in Sunnyside and the lease was coming up for renewal, so Fatima made an appointment with Linda Johnson who was the advisor in Yakima at the time. (Johnson retired in 2017 and Sarah Truglio is now the SBDC advisor in Yakima.)

At that first meeting, Fatima told Johnson, “We want to build a shop. This is how much it will cost. Can we afford it?”

Johnson showed Fatima how to set up financial spreadsheets that would allow them to see the financial health of their business more clearly. Fatima remembers the meeting where Johnson went through profit and loss statements, monthly cashflow reports, cost of goods, etc.

“Oh my God,” Fatima said, “We’ve never been able to see our finances like this!”

Johnson explained that if they kept doing what they were doing, even without raising sales, they should be able to afford a loan to buy the property and build the shop.

“I can’t explain to you what that meant to us,” Fatima said.

With Johnson’s help, Fatima put together a business plan and all of the financial documents and projections needed for the loan application. They didn’t qualify for a traditional loan, so Johnson suggested they apply for a U.S. Department of Agriculture (USDA) Rural Development-backed loan.

She made her first contact with the USDA in December 2016 and by February 2018 they had moved into their new facility at the Port of Grandview.

For the grand opening, Fatima invited Grandview Mayor Norm Childress and Rep. Dan Newhouse, both of whom came, along with 300 other civic leaders, customers, business colleagues, friends, and family.

“I wanted to do it big to show how far we’ve come,” Fatima said.

Opening the shop in Grandview was a big step, she said, but they wouldn’t have been successful if they hadn’t first gotten business systems in place to accurately track their finances.

Before working with the SBDC David didn’t see the point of creating financial spreadsheets, but now he runs reports every week, if not every day.

“If you don’t run the reports every morning, you might think you are making a lot of money, and you aren’t,” David says. “Now, we have better systems.”

Everyone contributes to the success of the business, David says, but Fatima’s role has been key. “Hiring Fatima was the best decision I’ve ever made,” he said.

Fatima was the first relative he hired full-time, but not the last. Clemente, the oldest brother who left school at 16 to help support the family is now the head mechanic. David’s father, Gerardo, does welding and fabrication for FMS. Alan, the youngest brother, is the head of the parts department. Gerardo Jr., the third of five siblings, lives in Seattle and works for Costco. He also consults with David and Fatima on Fasts Mobile Service’s expansion plans.

Sharing what they have and taking care of each other, whether a family members or not, seems part of the culture at Fast Mobile Service.

Employee birthdays are celebrated with not just cake, but a catered lunch. They began offering health insurance to all full-time employees five years ago and this year they also started a 401K plan.

“Everyone to deserves a better life if they are working for it,” he said.

After moving the business to Grandview they were invited to join the Rotary and are now active members. Fatima heads up several events each year and David nearly always says yes when someone calls to ask for support for a youth activity or community event.

“I want to be part of the community that helps people,” he said.

For more about Fast Mobile Service.